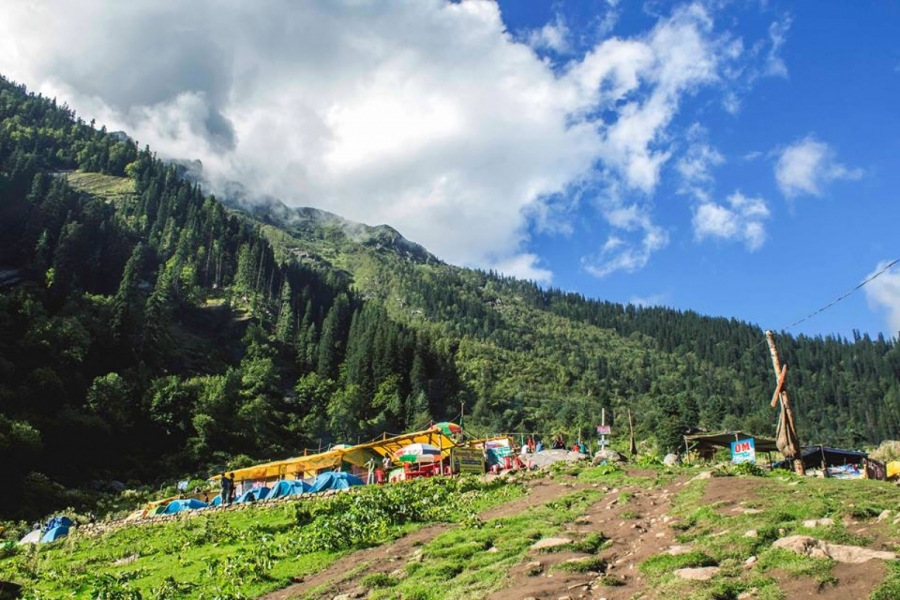 Kheerganga trek is one of those treks which can be enjoyed by sitting in the lap of nature and hidden in the Pin Parvati Valley. Kheerganga Kasol is in the midst of Parvati Valley. The elegant Kheerganga looks like paradise in Himachal Pradesh with lush greenery flowing alongside a pearl necklace. Kheerganga adds to the beauty in Kasol where grey-green mountains climb through the Parvati river.

If you are planning to go out to climb the Kheerganga trek you must be confused about when to go and what is the best time to climb that Himalayan valley. Also, how to plan to make this trek memorable and best of adventure memories. So we are going to talk about the Kheerganga trek in detail to make your trip the best out of all.

Find amazing camping near Mumbai at the best price here. Book now and explore with friends and family!

Kheerganga is located at an altitude of approximately 2950m. After reaching Bhuntar on Delhi- Manali Highway you have to drive towards the Bhuntar village. Bhuntar village is a small village where two diverged roads go towards the Parvati river and Beas river. After reaching Bhuntar you have to take the bus towards Barsaini after Kasol. Although actual treks start from Barsaini which is 16 km from Kasol and this Barshaini road heads on this Kheerganga route.

As per Hindu mythology, Lord Shiva lives here. Lord Shiva meditated here, Goddess Parvat used to cook rice in this water itself, hence the grey and milk complexion of the river is because of this. Once when Goddess Parvati visited here and asked Purushotam to convert the Kheer into the water. Because she knows, In Kalyug people would fight over it.

Kheerganaga is a popular crown jewel among all treks in Kasol. Kheerganga is a 7-8 hours trek to the hot springs located at the altitude of 13000 ft. You may take a warm dip in this water to wash your all ailment.

ROUTES TOWARDS THE KHEERGANGA

A day trek from Barsaini to Kheerganga is possible but not advisable whether you are an expert trekker you must not attempt this in a single day. Kheerganaga is a 12-13 km distance trek regardless of the route you take.

There are two different trek routes towards Kheerganga. One is from Barshaini and the second route goes via Nakthan village and leaves for the Barshaini bridge. Kheerganga trek is moderate. If you start trekking before noon then you can reach Kheerganga by sunset where you have to stay in camp for the night.

The months of May, June, September, and October are considered the Best times to visit Kheerganga as the weather is pleasant without humidity.

Considering your journey starts from Delhi or Chandigarh, you have to reach Dehradun and then Kasol. Once reached to Dehradun, You may stay either in Kasol or in Challal.

Barshini is a starting point of Kheer ganga Trek. Barshaini is around 17km from Kasol. You can take a taxi or cab from Kasol to Barshaini. Bus options are also available in budget.

Barshaini is a small and beautiful village where you may find stay options. Tosh is just 3 km away from Barshaini. Tosh also can be a good choice to spend night uphill. From Barshaini Kheerganga is 15 km depending upon the route you take.

There are two routes to trek Kheer ganga. One is via Nakthan and the second one is via Kalga village.

If you choose to trek via Nakthan, a few kilometers after the Nakthan a famous temple Rudranag is there. A beautiful waterfall is one of the reasons why people prefer this route.You take a break and rest and walk again. After walking some distance, you will arrive on River Parvati. After crossing this bridge, an uphill climb begins.

Since the Barshaini route is a popular route, you will have no problem navigating your way.

Khee rganga trek via Kalga is a little longer but easier route. Trek via Kalga is not that difficult. While you trek the trail, there are aesthetic views of large mountains, don’t forget to explore and enjoy. The sound of river Parvati is just mesmerising. After hiking upward, while on the way various dhabas and cafes are available. You may freshen-up there to go further. After claiming to view two beautiful and major waterfalls you will head to Kheer ganga. Once you reach Parvati Kund, The kheer ganga trek will be complete.

It takes 8 hours to complete the entire Kheerganga trek.

THINGS TO CARRY ON KHEERGANGA TREK

Planning to do a trekking near Mumbai ? Book the best price!