Best Treks to do in Ladakh 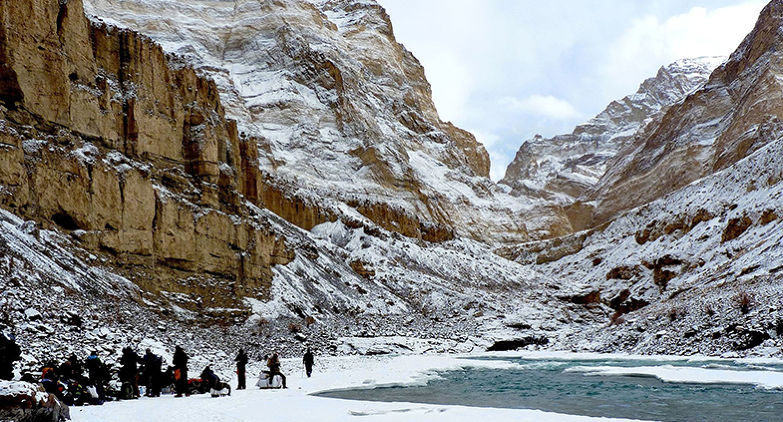 Located in Ladakh, near Hemis National Park, this beautiful river valley is accessible from Ganda La pass in the west. This trek will get you hooked right from the start with its charming landscape to the cold desert region. As you walk beside this valley, you will pass by humble villages such as Rumbak, Sara, Markha that will make you feel connected to nature.

Get to know the culture of local nomadic families with their numerous small monasteries. Techa gompa, a buddhist monastery is one of them. The trail of Markha Valley crosses three passes- Ganda La, Kongmaru La and Stok La.

The craze for this undeniably famous Chadar Trek definitely makes the cut among Ladakh’s best trek. Since, there are really less trails that let you pass through gorges among the frozen waterfalls this trek has made its name as one of its kind.

Walking on the sheet of ice-covered river of Zanskar while you can feel the river flowing beneath is an experience of a lifetime. You will get an eerie feeling as you listen to the sound of your footsteps against the mirror ice of the Chadar.

Also, brace yourself for the highlight of this trek, frozen Nerak waterfall, as you make your way through the trek.

Traditionally used as an only means of travelling in harsh winters, now provides a 105 km of adventurous trekking. The trek which requires you to walk on a frozen river at the highest altitude in mind numbingly cold weather, is definitely one of the most challenging treks.

Snow leopard trek is located in the highly protected area of Hemis National Park, Ladakh. This is the most popular trek among nature and wildlife enthusiasts alike from all over the world.

In this high altitude of around 13,000 ft, you can encounter the very rare snow leopard in its natural habitat.

The entire trail is decided to spot the rare flora and fauna in this region which covers the entire Rumbak Valley.

The trail offers surprises at each turn with many species like blue sheep, Tibetian antelope, yak, wolves and brown bear.

As you watch out for the snow leopard you can enjoy the sights of birds like majestic golden breasted eagle, migratory bird and vultures.

With an altitude of 20,187 ft, it is the highest mountain in the Stok range of Zanskar mountains. The snow and height itself pose a challenge but what makes it more difficult is the endurance of an individual. The need to acclimatise before and during the ascent is crucial.

Stok Kangri peak lets the trekker explore the Himalayan range from a wider perspective. It is perfect for walking through exquisiteness and cultural beauty. If you have the stamina for it, then go for it

Trek through one of the notable historic places to explore the prehistoric era. Our history books were full of Indus valley civilization, where it is believed that the civilization of India first began.

Indus Valley Trek is one of the easiest trek routes in Ladakh. Its entire trail runs along the Indus River and Old Caravan route. You will come across many monasteries and some rock art depicting the culture of the ancients.

This trek passes through Leh, Alchi and Lamayuru giving you diverse landscape and scenery. You will even get to trek Tanglang La, one of the highest passes. One can also come across exotic wildlife of high altitude.

Parang La trek was the traditional route connecting the people of Spiti, Changthang and Tibet back in the 19th century. It was considered as the gateway to Ladakh. Starting from the Zanskar region and going through the great Himalayan region, this trek is known as the trans Himalayan trek.

The primary challenge of this trek is to cover the large distance. One would find wide open meadows and beautiful lakes in its trail. Tso Moriri is one of such beautiful lakes. It opens up the beauty of cultural diversity where you can make your camp and relish in its presence.