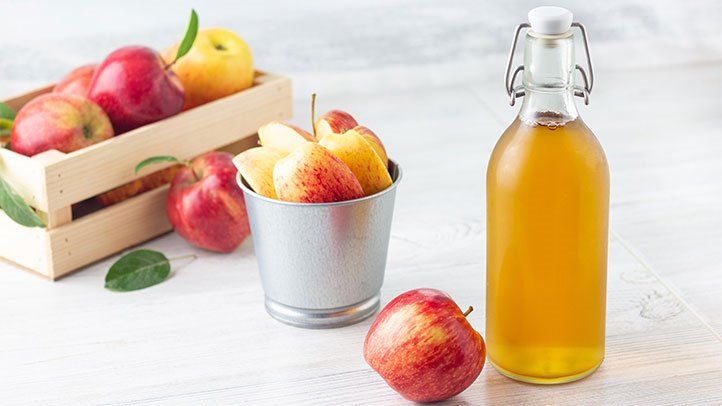 Apple cider vinegar is rich in probiotics and yeast. These microorganisms might help improve the digestive system. This acidic solution is also used for food preservation and cooking. However, its acidity level is very high, so it’s not advisable to drink it straight. It may cause tooth erosion, so drinking it in small amounts is best. Instead, you can add it to water or tea.

The acidity of apple cider vinegar

The high acidity of apple cider vinegar helps the digestive system digest food properly while promoting a healthy microbiome and improving lymphatic drainage. The edge of apple cider also helps protect the body from infection and fungus. In the past, people used apple cider vinegar as a wound disinfectant and to treat bacterial and fungal infections. Now, it is often used as a food preservative. Its antimicrobial properties make it a healthier alternative to artificial preservatives.

Its tangy flavor makes it an excellent addition to salad dressings, marinades, sauces, and stews. It can also be used as a natural cleaner and disinfectant around the home. ACV has antimicrobial properties that inhibit bacteria, including Escherichia coli, Staphylococcus aureus, and Candida albicans.

However, there are several precautions that you should follow when using apple cider vinegar. It is not recommended for people with high blood pressure, diabetes, or Barrett’s esophagus. Moreover, it can interact with other drugs, so talk to your doctor before starting a daily dose.

Apple cider contains between five and six percent acidity. There are different varieties of this type of vinegar, and the quality and sharpness of the vinegar depend on the fermentation process and the type of bacteria present. The bacteria that produce acetic acid are present to produce the highest quality apple cider vinegar. In addition, the type of apple used to make the juice also impacts the acidity of apple cider vinegar.

Apple cider vinegar can help you manage your blood sugar levels. Research suggests that it has a powerful anti-glycemic effect, which can help you control your blood sugar. This effect is believed to be due to delayed gastric emptying and reduced starch digestion. It can also help with weight control, increasing the feeling of fullness. People with diabetes and non-diabetes who take apple cider vinegar with a meal may feel full sooner and eat less, especially when combined with a high-carb meal.

Researchers have also found that apple cider vinegar can help with blood sugar control in people with type 2 diabetes. This is because it may help insulin-resistant individuals increase their insulin sensitivity. It may also aid digestion, which in turn helps control blood sugar levels.

Apple cider vinegar contains acetic acid, which has been shown to reduce cholesterol and triglyceride levels in the blood. This can reduce the risk of heart disease and heart attacks. It may also improve blood circulation by removing the buildup of cholesterol in blood vessels.

Some of the health benefits associated with apple cider vinegar are attributed to the presence of enzymes and friendly bacteria. The vinegar also inhibits the growth of cancer cells. It has been revealed to improve heart health. Research conducted by Harvard University has shown that women who regularly consume vinegar salad dressings have lower risks of developing heart disease. In addition, animal studies have indicated that vinegar may lower blood pressure and promote weight loss.

One of apple cider vinegar’s more popular health claims is that it can improve digestion. However, there is very little scientific proof to support this claim. However, some people are convinced by advocates of the acidic properties of vinegar. For example, some people have reported relief from gas or ‘heaviness’ after eating.

However, before using apple cider vinegar, people must consult their doctors and healthcare professionals. While it’s safe for most people to consume a few teaspoons a day, there are risks associated with excessive use. For example, it may decrease the amount of potassium in the body, harming the nerves and muscles. Additionally, it may interfere with prescription drugs, including those for heart disease and diabetes. It also has a strong taste that some people may find unpleasant.

Another everyday use of apple cider vinegar is as a salad dressing. While intense, it can be combined with olive oil to create a flavorful sauce. It can also be used to marinate vegetables and meats. It is also an excellent complement to smoothies.

Another health benefit is that it can reduce blood sugar. While it does not significantly improve blood sugar levels, it can help reduce the surge in sugar levels after eating starchy meals. However, people who have diabetes should consult with their doctors before using apple cider vinegar. Also, people with gastroparesis should not drink it unless their doctors approve.

Apple cider vinegar has antimicrobial properties, which inhibit several types of bacteria. These effects are due to the polyphenolic and acetic acid content. These compounds can prevent growth, kill bacteria, and act as anti-germination agents. They also inhibit the production of antibiotic resistance in bacteria. Furthermore, the polyphenols and flavonoids found in apple vinegar inhibit b-lactamases and topoisomerase enzymes secreted by bacteria. Their presence also inhibits the production of lipopolysaccharide, which forms a barrier in the membranes of bacteria.

Apple cider vinegar is also effective against fungal infections. Its antifungal properties have been demonstrated in clinical studies. A man with type 2 diabetes treated with apple cider vinegar twice daily for seven days reported a 94 percent reduction in the number of fungal organisms in his mouth. Another study showed that the vinegar was effective against Candida species.

There is some uncertainty about the antimicrobial effects of apple cider, but one study found that it has significant antibacterial effects against three types of bacteria. In vitro tests inhibited the growth of C. Albicans, S. aureus, and E. coli with dilutions of up to a half-dilution. ACV also altered the integrity of cell membranes and affected various biochemical pathways.

The antimicrobial activities of apple cider were assessed using the agar well diffusion method on Muller-Hinton agar. It was also evaluated against Salmonella typhi. In addition, it was shown that ingesting a food item treated with apple cider vinegar reduced the bacteria in the food. However, there is some concern over the effects of apple cider on people with sensitive stomachs or IBS.

Calcium is essential for building strong bones and teeth and helps prevent osteoporosis. A diet low in calcium can lead to weak bones, which can easily break. Calcium deficiency is not the leading cause of osteoporosis, but a lack of calcium in the diet can lead to it.

Another way to reap the bone health benefits of apple cider vinegar is to add it to bone broth. It can aid digestion and can also help you curb overeating. Apple cider vinegar can be mixed with lemon juice or water for a refreshing drink. Mix apple cider vinegar with fresh ginger or honey to increase the benefits. This drink is beneficial for digestion because ginger is an excellent digestive aid.